The game picks up after Quest for Booty, with Ratchet searching the Polaris Galaxy’s Breegus System for Clank with the help of Captain Qwark, who is located in the Great Clock. Clank is being held hostage by the villainous Dr. Nefarious, who claims to be assisting the Zoni in repairing Clank but is attempting to use the Great Clock for his own purposes. Ratchet and Clank must band together to prevent Nefarious from gaining control of time while learning more about their own pasts.

A Crack in Time is a third-person action-adventure game that combines shooting, role-playing, platforming, puzzle-solving, and open-world exploration. It enables Ratchet to travel through space with the Aphelion, completing side missions on moons and visiting planets within star sectors. Ratchet can use several new weapons in battle, including Constructo Weapons, which can be fully customized.

While Tools of Destruction devices are not present, both the Groovitron and Mr. Zurkon, which were previously featured as devices, are now featured as weapons that can be upgraded alongside other weapons. Clank’s gameplay is entirely new, centered on his own time powers. He uses his temporal recordings to solve puzzles and the Chronoscepter to defeat enemies rather than simply commanding units as in previous games. 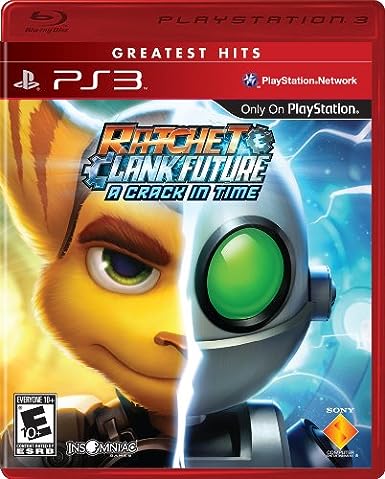 Ratchet & Clank Future: A Crack In Time - Playstation 3
$94.67
Buy Now
We earn a commission if you make a purchase, at no additional cost to you.