“Just a year older than George McFly, Biff Tannen stood with his potbelly leaning unashamedly over his trouser tops, an attitude that made his loud plaid suit, pinky rings and gold chains seem even more bizarre. Whereas George McFly was reticent, Biff was loud and obnoxious, the type of person who talks loudly in movie houses or yells epithets at players during sports events. He was, in short, an intimidating lout, and no one was more easily intimidated than his friend and associate George.”

Biff Howard Tannen is a fictional character in the Back to the Future trilogy. Thomas F. Wilson plays Biff in all three films as well as the Universal Studios ride, and voiced the character in the animated series. Biff is the main antagonist of the first and second films. Biff’s great-grandfather, Buford “Mad Dog” Tannen, fills a similar role in the third. 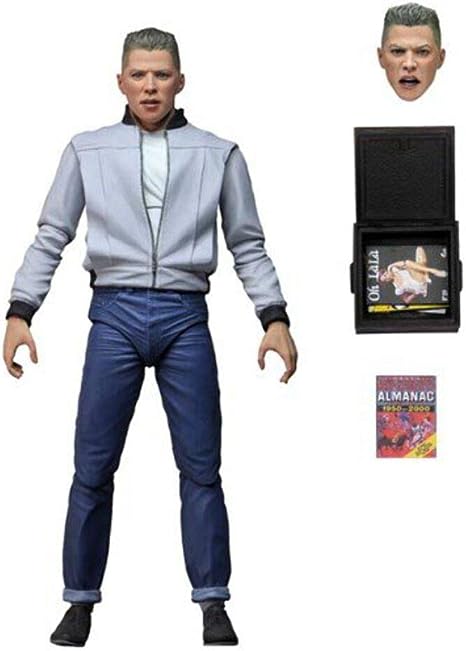 "So why don't you make like a tree and get outta here?" The formidable but not too bright antagonist of the Back to the Future franchise, Biff Tannen, is dressed in his "Enchantment Under the Sea Dance" outfit and features the licensed likeness of Tom Wilson. Includes two interchangeable heads with different expressions, hands with different poses, the Gray's Sports Almanac, and window box packaging.

The character is portrayed as a tall, aggressive, and dim-witted bully who obtains what he wants by intimidating others into doing his work for him, or by cheating. He and his family members are shown to misuse idioms in ways that make them appear stupid and pathetic despite their intention to insult or scare. His favorite insult is “butthead”.

Back to the Future Part II